We are a group of year 4 architecture students studying at Sheffield Hallam University.

We are currently exploring how space might be produced in different ways from our base in Tinsley.

We will be working alongside Tingas Tinsley – an organisation aiming to turn a former infant school into a community facility.

Please engage with our work as it progresses through the year.

In order to try to find a way to join my ideas together and develop a coherent vision for the project, in light of feedback from my last presentation, I have read A Post-Capitalist Politics (Gibson-Graham, 2006). The book was challenging to read for someone who had not read much political theory but I understood the majority of the arguments and it made me realise that the project is as much about changing the way that the residents of Tinsley see themselves and it is changing Tinsley.

A common theme throughout the book is the need to challenge our preconceptions that capitalism is the only viable form of economy by explaining that we already engage in many forms of non-capitalist exchange, such as housework and childcare. The real economy is a thin layer of capitalism over a thick mesh of traditional and non-profit practices. Exposing these activities and using them to help people imagine and then work in new ways is the first step to creating a community economy. Communities often already have the skills required to create a successful economy but do not use them because they do not fit into the mainstream view of economics.

Whilst the book does mainly focus on economics, politics and philosophy, there are parts that directly relate to architecture; such as the idea that you must reinvent yourself to change your world but also reinvent your world to change yourself. This means that Tinsley needs to gain confidence in some of the things that it already has and think about using them in new ways, rather than relying on investment from outside the area. One good analogy in the book is giving the community a fishing rod, rather than fish to make them more self-determining.

The book uses several techniques to map the wide range of skills and transactions that occur in the community and I have applied them to Tinsley to increase my understanding of the existing economy and of interventions that could make the area more self-determining.  There are many skills and assets that the Pakistani, Roma and White communities each have, such as family and religious values, but there are key differences such as samosa cooking in the Pakistani community and metal-working in the Roma community.

I have started reading the Social (Re)Production of Architecture (Petrescu & Trogal Eds., 2017) which appears to reflect some of ideas in A Post-Capitalist Politics, applying them to architecture more specifically. The independence of communities proposed by the co-operatives in this book could provide the Roma community with a chance to earn money, whilst not having to deal with the PAYE lifestyle and the authorities as much as they would in more conventional employment. 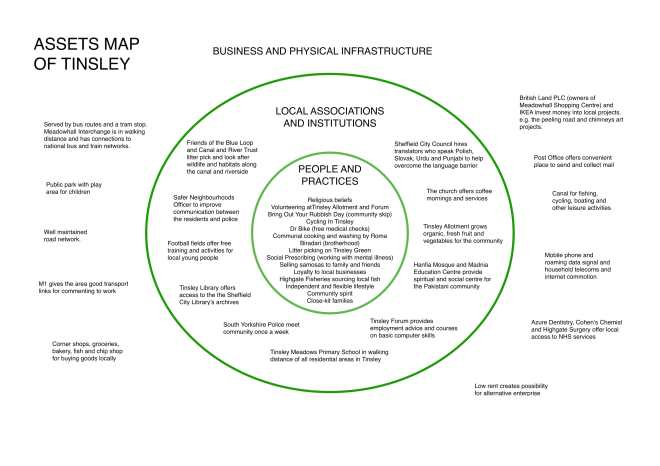 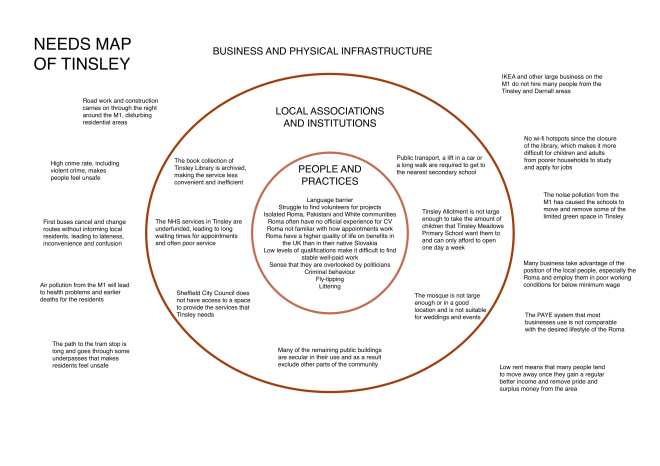